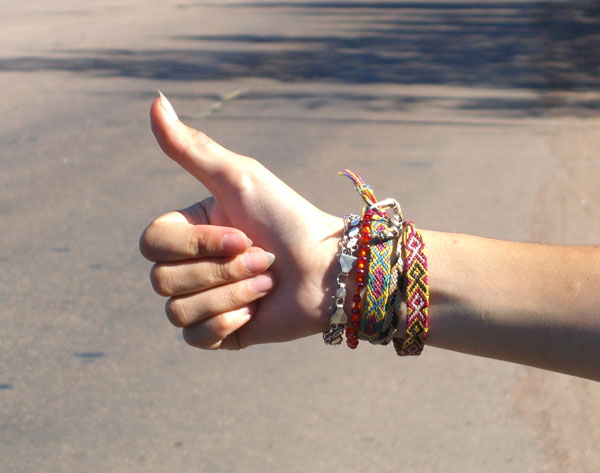 In print now in Gargoyle Magazine #66.

In the early 1980’s it was generally considered safe to hitchhike on Nantucket Island. At least, those of us who had only just graduated college and come for the summer— career-less and broke—found it an economical and efficient mode of transportation. And we never hitchhiked alone.

After all, this tiny (45 square mile), quaint island thirty miles off Cape Cod was a little paradise, ripe with opportunities to waitress in wildly expensive restaurants and babysit for or clean the vacation homes of reclusive celebrities. Our parents, of course, would have been appalled.

We were a pack of four Southern Gals, newly graduated from a small all women’s college in Virginia. (Then, we called it “all-girls”, not “all women’s”.) We had arrived on the ferry from Hyannis after a long drive packed into my Ford Mustang and we would spend our first night on Island at the poetically named Flossie’s Flophouse.

The Next morning, we would take possession of a rented ranch house that had been sold and emptied out. Renovations were to start in September after we left and the realtor tossed in two mattresses and two box springs and a sleep sofa with no cushions that never stayed folded closed unless you sat on it. The house also included a mystery male roommate, who used everyone else’s shampoo. By the end of the summer, an additional couple had started living in the attic.

That whole summer, we slept on either a mattress or a box spring in alternate weeks. Aside from the aforementioned sofa, the balance of out furniture consisted of creative assemblies of stolen plastic milk crates. But we thought it was all pretty great.

The night I write about in “Confab” is fictional—well, the climactic part is. The amount of truth peppered through the tale might vary, depending on whom you ask about it. It’s more of a composite of the events of that summer of 1981 than it is a snapshot of one night. What started out as a re-telling of drunken high jinx morphed, as I wrote it, into an exploration of regret and shame and how quickly life can change when you aren’t paying attention.

HERE’S THE STORY AS IT APPEARED IN GARGOYLE MAGAZINE #66

I’m wearing that acid-green tank top of Margo’s. I like how it sort of glows when the headlights go by. The three of us are hitching into town from ’Sconset and I push Margo out front to stick her paw out. She’s the prettiest, and sure as shooting a station wagon pulls over. It has one of those “Baby on Board!” stickers and this harried-looking young mom waves to us to get in. I sit in back with Jenny and a little tyke who’s napping in a car seat, drooling up a storm. A diaper change is in definitely in order. Margo chats the mom up, saying how cute the kid is, and then she asks about babysitting possibilities while I wonder how long that strand of drool will get before it lands on my cutoffs. I push over toward the window, which is covered in tons of those cartoon stickers kids get after they go to the doctor.

We get dropped off pretty close to Old North Wharf, and Margo is making arrangements through the driver’s window to babysit later in the week. We all wave and say, “Thanks, ma’am,” with our best Southern-all-women’s-college-manners, and the harried mother drives away.

The band at the Rose and Crown is supposed to be good tonight. I lead the way, as usual. It’s early enough that there’s not a line to get in. Being that this is a small island off Cape Cod, the Rose and Crown has nautical decor. The door is made of weathered, driftwood-looking planks and the knob is made of rope—some sort of complicated marine knot—and to top it off there’s a pretend porthole. As the door swings open, we hear “Beat It” thumping over the sound system and the air wafting from inside is smoky-warm-beery. A bored-looking bouncer with his eyes at half-mast has his arms crossed, resting across a Buddha-impressive gut. He yells, to be heard over Michael Jackson, “Ten dollars cover, ladies.”

Whoa, steep, I’m thinking. I sign-language the other girls to follow me back outside for a confab. We’re standing just outside the now-closed nautical door, debating whether: A) We each have ten dollars, and, B) Do we think guys will buy us beers if we go in? As we are trying to reach a consensus, these three dudes walk up. I turn to them and say, “There’s a ten-dollar cover,” as in, Whoa, can you believe they’re charging ten bucks? Only, get this! The first dude whips out his wallet and hands me two twenties, like he thinks I’m working the door. I smile at him and pull out a ten spot and give it to him. Then I open the door and say, “Have a nice evening, gentlemen.”

My girls are looking at me with their mouths open. Like, really, open. (I believe the proper word is agape.) So we just start running. Seems like the thing to do. We kind of get into the drama of the whole thing, diving over hedges and shit, creeping down alleys, imagining that the police are after us. In my mind, right then? Getting away was the most important thing in the world. But we were laughing—like, crying-laughing, and before you know it Margo snorts and Jenny wets her pants. And that makes us laugh more. At Orange Street we stop, all out of breath, but still giggling, and my sides are hurting by now.

We start hitchhiking back to ’Sconset and some nice white-haired grandma picks us up, and we have to listen to her lecture about the dangers of hitchhiking and shit. She lets us off at the traffic circle. Here, they call it a rotary. When we get out, Jenny takes the old lady’s cardigan from the backseat. It looks like one of those nice ones from L.L. Bean. Margo complains that she’s hungry, so we head to the Rotary Café and spend thirty dollars on blueberry pancakes with real maple syrup and whipped butter and big glasses of milk. By now it’s midnight. Back to the rotary and Jenny sticks her thumb out. Her jeans have dried and I’m cold and sober now, so she lets me wear the old lady’s sweater. Fog is starting to roll in and we can hear the Sankaty Head Lighthouse horn.

After a couple of minutes a car pulls over. It’s like a Maverick, I think, with a big rusted dent in the side. Jenny and I jump in the back. Margo gets in front. The dude says, “Heading to ’Sconset?” He turns around and, I shit you not, it is that dude I took the money from at the Rose and Crown and I think that I am going to toss pancakes right there. Jenny is laughing hysterically. The dude asks if we can each spare a buck for gas because he’s out of money, and then he asks if we want to buy any of his cassette tapes, ’cause he needs to scratch up enough to get his car over to the mainland to get back to school.

Margo turns and gives me this you are a daughter of Satan look.

I’ve pulled my hair out of a ponytail and pulled it sort of around my face, and buttoned that cardigan right up to my neck. It has these nice pewter buttons that make me think of Heidi. Jenny is still giggling, but I feel bad, like that time at summer camp when I poked pinholes in everybody’s tubes of toothpaste with a pushpin and blamed it on my bunkmate. Only I got busted, because guess whose toothpaste tube didn’t have any holes in it?

Jenny goes through her pockets and pulls out some bills and says, “Can I look at your tapes?”

“Sure,” the dude says. “Two bucks each. I have the new Dire Straits and Elvis Costello.” He turns on the light inside the car and is passing his tape box to the backseat, saying “Do you all like Elv…”  and his eyes lock on mine and there are these super bright lights coming closer and a boom then a slow screeching that must be metal bending and it hurts my head then there’s all this glass and not even time to scream.

In the Nantucket Cottage Hospital, I sit by Margo’s bed and hold her hand. The dude’s parents (his name was Wesley, his mother said) have just left. They will take him back to Rhode Island to be buried. Margo’s mom is on her way from Birmingham. The docs haven’t let her look in a mirror. Jenny was airlifted to Boston, and the doctors are hopeful. I want my mom to get here.

I want to go home.

One thought on “The story behind “Confab””