Let me say one thing. Well, two things, actually. The first is that I never thought I’d be chosen as a Hawthornden Fellow. But I filled out the application in the hopes that maybe, just maybe, no other applicant could make it in a particular month—January, for instance, or someone might break a leg, or whatever, leaving a spot for me. Then I chickened out and told the nice folks who had offered to write recommendations for me ‘thanks, but I don’t qualify.’ Then, I decided I really, really wanted to try for it, so I did. 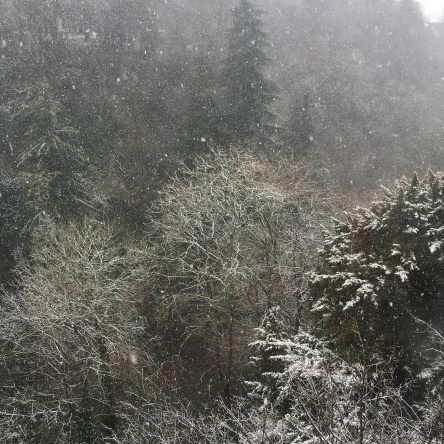 The second and far more important thing is this: I am profoundly grateful to the late Mrs. Drue Heinz and her committee, and to Hamish Robinson, the administrator of Hawthornden, for the opportunity to spend a month here. While the initial awe has mellowed over my four weeks here, it will never go away.

For eight months of the year, five or six writers are invited to spend a month at Hawthornden Castle. Novelists, playwrights, screenwriters, poets, etc., from all over the world may apply. The daunting eleven-page application must be requested by mail, from Scotland, and returned, hand-written, to the administrator, also by snail mail. 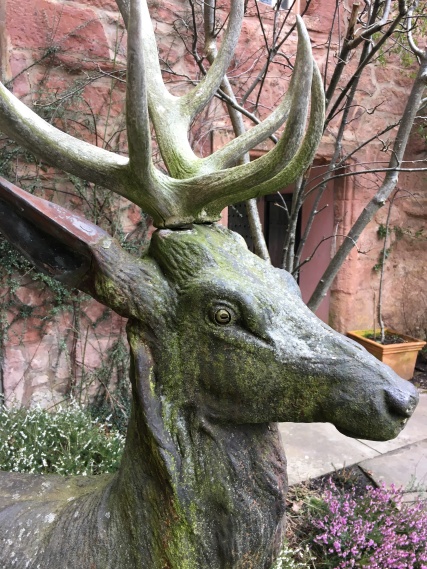 Aside from a few housekeeping rules, the main thing is that silence be maintained from 9:30am until 6:30pm, every single day. There is no internet available to Fellows and very spotty cell reception. In short, it is a place to write without distraction, while the lovely staff does one’s laundry, fixes one’s meals, and tidies one’s room. For an entire month. In Scotland. No, I’m not making this up.

The chef, Ruth Shannon, provides wonderful traditional Scottish fare for dinner: Comforting fish pie on snowy nights, roast beef with Yorkshire pudding and perfectly roasted potatoes on Sunday. And her puddings! Her almond cake, her berry Charlotte, her trifle, and that chocolate soufflé! Her first cookbook is in print and another is in the works.

The writer’s bedrooms are named: Boswell, Evelyn, Herrick, Bronte, Milosz, Drummond, and I was in Jonson. Upon arrival, I unpacked my family photographs and pictures of my three dogs, my yoga mat, hiking shoes, and the three craft books I brought along: Janet Burroway’s Writing Fiction, A Guide to Narrative Craft, John Gardner’s On Becoming a Novelist, and a small volume called “It was the best of sentences, it was the worst of sentences,” by June Casagrande. The first two I read almost daily, as a religious person might study a devotional. Burroway always delivers when I have a writing problem or question. (I understand that the book is being re-issued soon, minus the anthologized stories she uses as examples.) Casagrande’s book I did not get to. I’m hoping it will help with my comma issues, but that’s another post entirely.

Our days here are for work, beginning after breakfast and broken by lunch and perhaps an afternoon walk. Sometimes I’ve done yoga in my room, trying not to knock over furniture and stifling my groans of pain, so as not to disturb my fellows.

Around 12:15 each day the muffled clang of Thermos against Tupperware heralds the arrival of lunch, and there, as if delivered by fairies, sits a lovely small wicker hamper (originally from Fortnum & Mason, in London) outside my bedroom door. When I unbuckle the leather straps, I find inside a Thermos of hot, homemade vegetable soup and a sandwich, neatly fitted into a container and halved, with carrot sticks and hummus in another little compartment. A cute little Babybel cheese completes this picture. Each day, I imagine I feel the delight of a school child, whose mother has lovingly packed my lunch. (This is projection because growing up, we got lunch money; but still…) 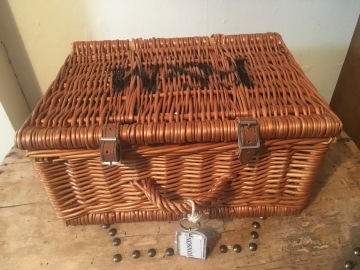 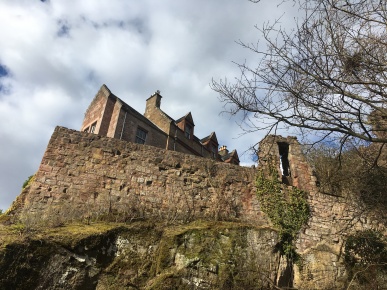 In 1982, Mrs. Heinz refurbished Hawthornden Castle and turned it into an international writer’s retreat. Located about 25 minutes south of Edinburgh, it boasts a 15th-century tower and a commanding view of the River Esk and surrounding woods. The Castle was enlarged and partially re-built by the poet and historian William Drummond, in 1638.

In 1842, Queen Victoria visited one of Drummond’s heirs, and the caves below the Castle were, reportedly, lined with velvet for the occasion. When Charles Dickens dropped in, unannounced, it is said that he was turned away by the housekeeper. His rockstar status had no currency at Hawthornden, apparently.

I won’t delve too deeply into the history of the Castle but suffice it to say that there are the obligatory winding stone staircases and low doorways. It would not surprise me in the least to walk in on the staff of Downton Abbey having elevenses in the Hearth Room. The layout remains a mystery, with no rhyme or reason and a window visible from the outside that does not exist inside. In our third week, Hamish led us on a tour of the caves and dungeon beneath the Castle. Photos below; 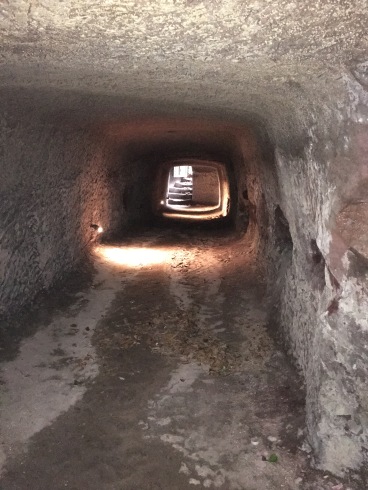 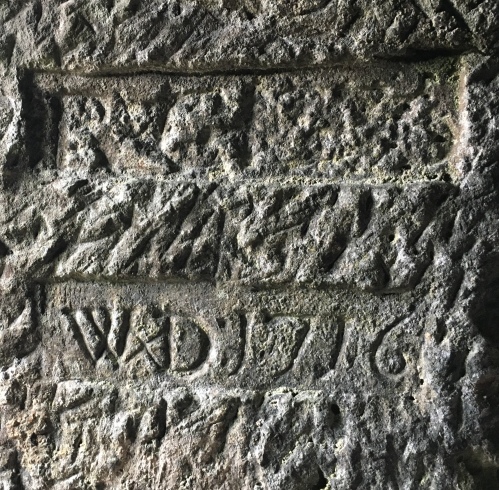 I asked if there are ghosts and Hamish said no. But one night, when I was having trouble sleeping, I rolled onto my side and pulled the duvet around my shoulders. Behind me, I felt the distinctive footfall of a cat landing on the bed, behind my back. I gasped, and turned over, alarmed, but there was no cat. And yet, I was sure I had felt those four light paws sink into the coverlet as if it had jumped from the empty bed next to mine. Super creepy, I won’t lie. But it didn’t happen again. 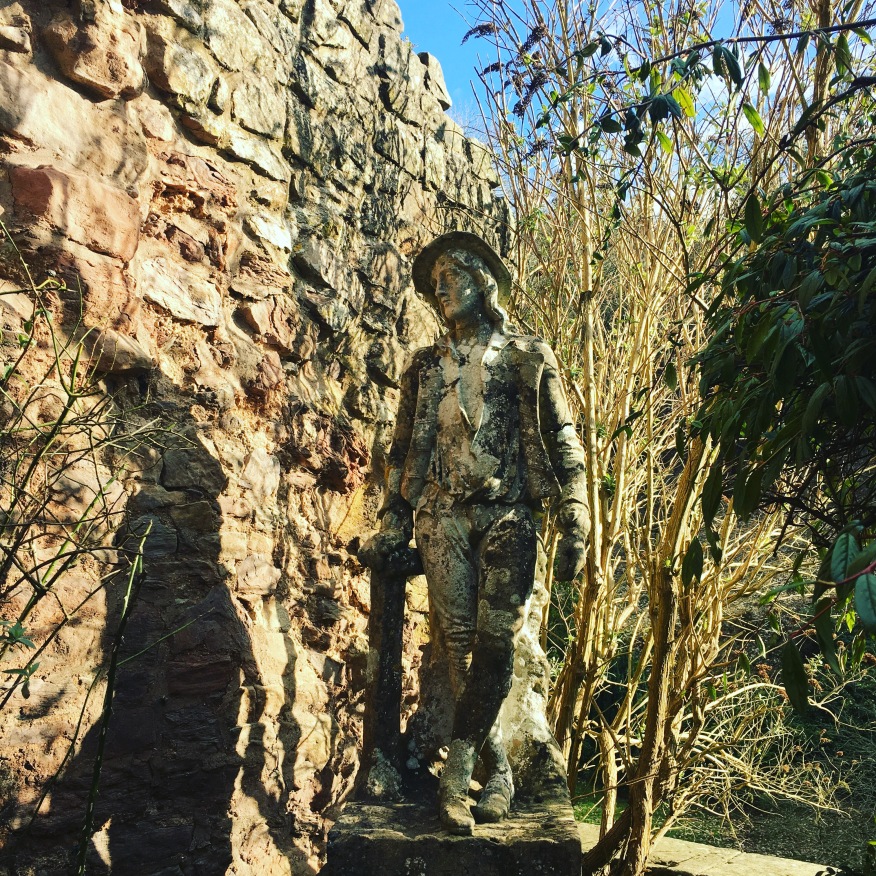 My Fellows for the month are three novelists (two American, one Scot) and a young American playwright. ** As the weeks pass, I’m increasingly awed by their talent. In the evenings, we sit by the fire in the drawing room, sipping wine or Scotch, and take turns on alternating nights, reading our work aloud or having it read by the others. I’ve never seen a moment of competitiveness (Bananagrams excepted), or envy, among us. We’ve bonded over how to efficiently operate the antique plumbing and where Wi-Fi is to be found. In our fourth week together, we are as adept at the Victorian plumbing as, well, the Victorians. 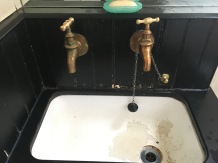 The Victorian taps on the third floor

We’ve shared stories of children, husbands, lovers and parents, success and self-doubt. Some of us received letters and two of us ordered the same beautiful, wine-colored suede boots. 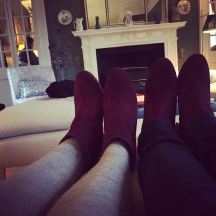 At the end of our first week, we started playing Bananagrams after dinner. I had never played before, but Sheena insisted this was much more fun than Scrabble, and she was right. 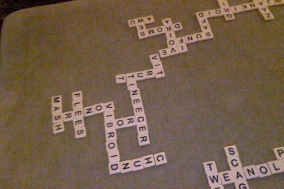 Shortly before I left to come here, my first novel, ETIQUETTE FOR RUNAWAYS, went out on submission to publishers. For non-writers, this means that my literary agent has sent out my manuscript to potential editors in hopes that one (or more) might love it, fight over it, and want to publish it, offering a multiple book deal with film, audio, and foreign rights.

So, while here I’ve been finishing the draft of my second novel. As I pack up to leave it stands at 372 pages and 115,000 words. I can’t say how many words I’ve added or cut, but I have done what I hoped to do, which was to connect the narrative pieces I already had and edit the thing. For instance, I spent an entire day doing a word search for ‘was,’ (1289 appearances to>1125) and another morning on ‘had,’ (990>784) with the intention of eliminating the dreaded passive voice.

When I get back there is still work to do. The manuscript needs copyediting, it needs to be read by beta readers, then I need to read it out loud to myself and, finally, send it to my agent. He does not do editing,  Although my MFA advisors, workshop members, and writing group have read parts of this, no one, except me, has read the entire thing. So, there’s that to be dealt with.

During my stay here, I’ve had to wrestle with the possibility that my first novel won’t sell. Apparently, this is the case for many writers. I have found myself, on several occasions, wallowing in self-doubt, thinking what am I doing, writing a second book if no one wants my first? Am I an idiot to keep at it? I haven’t had an answer to that yet, but I figured that now is really not the time to have an existential writing crisis. 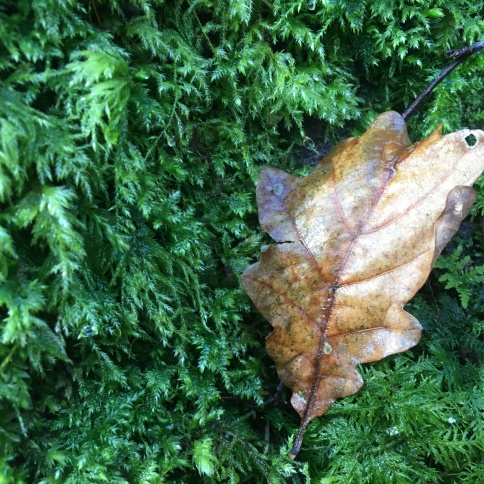 Today, one of our last, my afternoon walk followed deer trails through the high woods and I crossed a steep waterfall via a fallen log, all the while telling myself that if I fell, no one in the entire world knew where I was and if I screamed it was doubtful that anyone would hear me, except maybe the three horses I passed earlier. But there was no drama, except muddied shoes and some truly ungraceful fence-hopping. 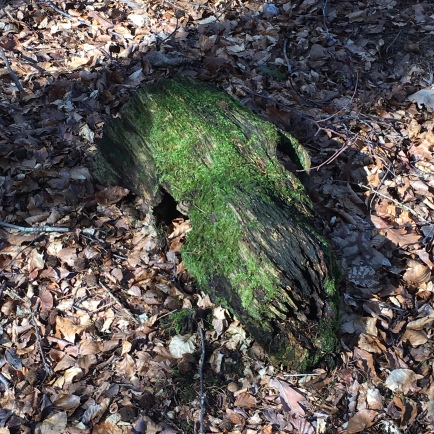 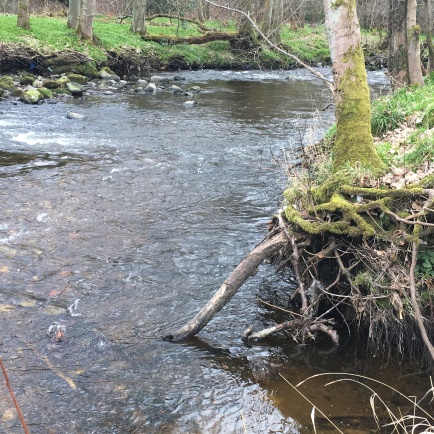 The North Esk runs below the Castle and walking trails wind down to a cottage ruin called “The Maiden Castle,” situated at the spit of land where the river turns back on itself. 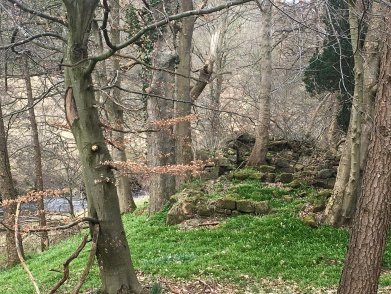 On my first trail walk, I was nervous and very cautious, afraid of falling in the thick black mud and afraid, also, of getting lost in the woods or tumbling down the steep banks into the frigid North Esk. (How embarrassing would that be—drowning on my first day?) On subsequent walks, I would venture farther afield and fall in the mud once or twice, though not over a cliff. On my rambles, I found shards of blue and white pottery and tumbled glass along the riverbank. In the newly plowed field adjoining the library, pottery shards flash in the furrows. Today, I gathered a pocketful of colored ones. To me, these are treasures I’ll take home, but to the farmer, I suspect they are no better than gravel. 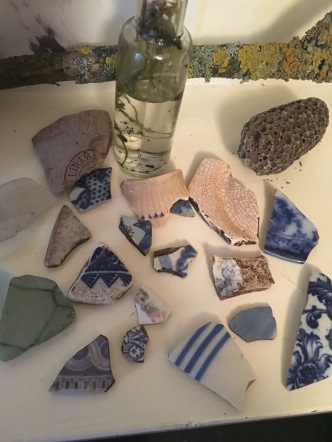 Now, as I write this, the rain has begun. We’ve had a snow-globe snowstorm and plenty of rain, and lots of sunshine. When we arrived, the snowdrops were blooming and as I prepare to leave there are seas of daffodils and pink wild cyclamen on the banks. I am snug, in my little room with its Laura Ashley fabrics and ruffled lampshade, pine desk, and fireplace. And I am filled with gratitude—not only for the Fellowship, which is so generous—but also for the friends I’ve made, for the time to do what I love, and for the family I left behind, who allow me the freedom to be here.

While I was in residence, out benefactress died, here. I wrote her a note of thanks after I received my acceptance, but I’ll never have the chance to tell her how much the experience has meant. I leave Hawthornden today, feeling full of gratitude. I hope she might have approved of our word games and laughter and cheers of appreciation for each other’s work. 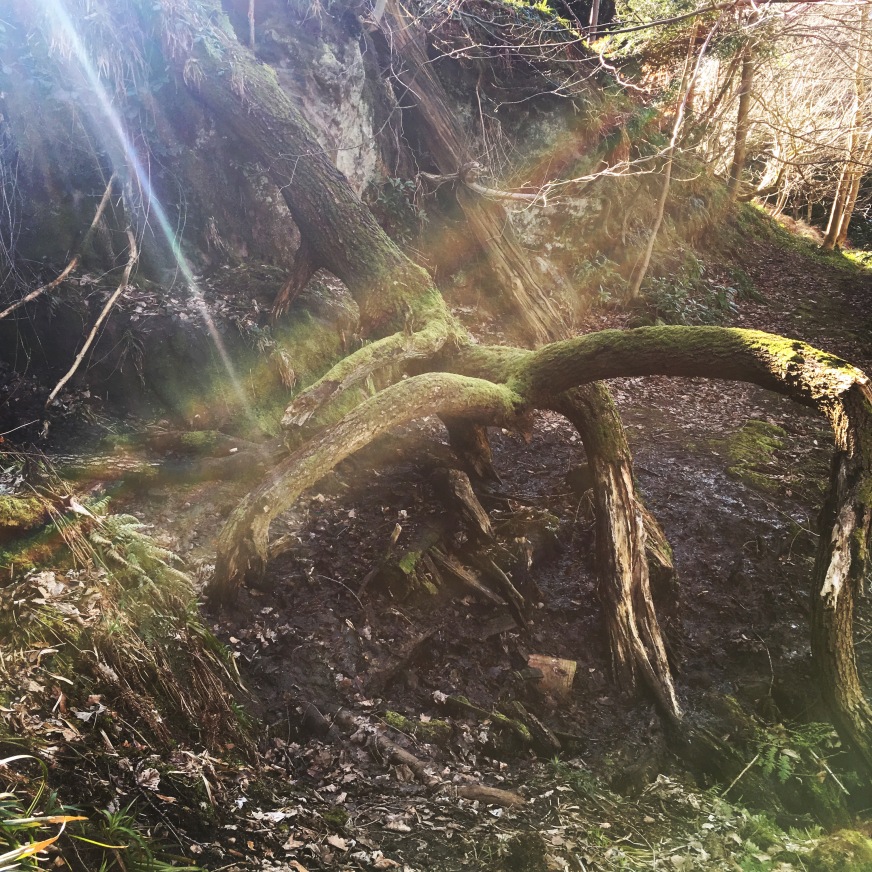 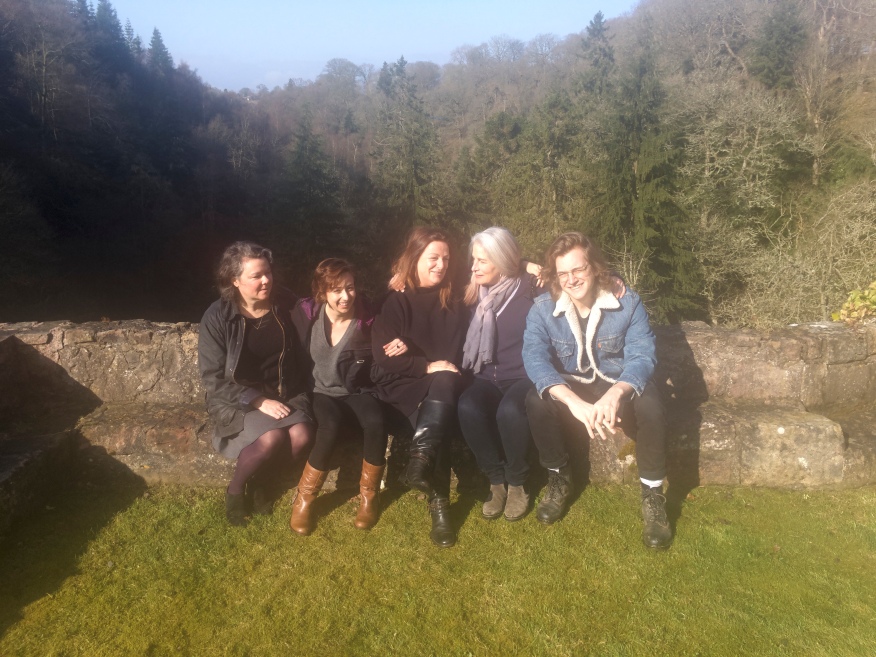 5 thoughts on “One Sublime Month”